Prorector on educational and scientific work 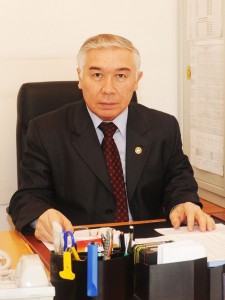 Doctor of Historical Science, Professor, Academician of the Kazakh  Academy of Education.

He graduated from the S.Kirov Kazakh State University.

Akhmetov K.A. began his scientific pedagogical career in 1976 in Tselinograd Engineering Building Institute as a teacher, Senior teacher, Docent of the Department.

From September 1991 till October 1996 – Docent of the History Department of the Almaty State University named after Abay.

From October 1996 till October 1999 – the Dean of the Historical Faculty of the L.N. Gumilyov Eurasian National University.

From 2003 till 2004 – the Head of the Department of the L.N. Gumilyov National University.

From March 2004 up to the present time – Prorector on educational and scientific work of the Eurasian Humanities Institute.

Scientific interests of Akhmetov K.A. are devoted to the study of the problems of the history of culture, intelligentsia and education. He is the member of the Dissertation Council on the scientific PhD degree under the L.N. Gumilyov ENU. He is the author of 1 monograph and 2 educational aids. He has 90 scientific publications.

Akhmetov K.A. was awarded: the Badges of the MES of RK «Honorable Worker of  Education of RK», «For the merits in the development of science of the Republic of Kazakhstan”, the Medals «10 жыл Астана», «Қазақстан Республикасының Тәуелсіздігіне 20 жыл».